The palace of Knossos 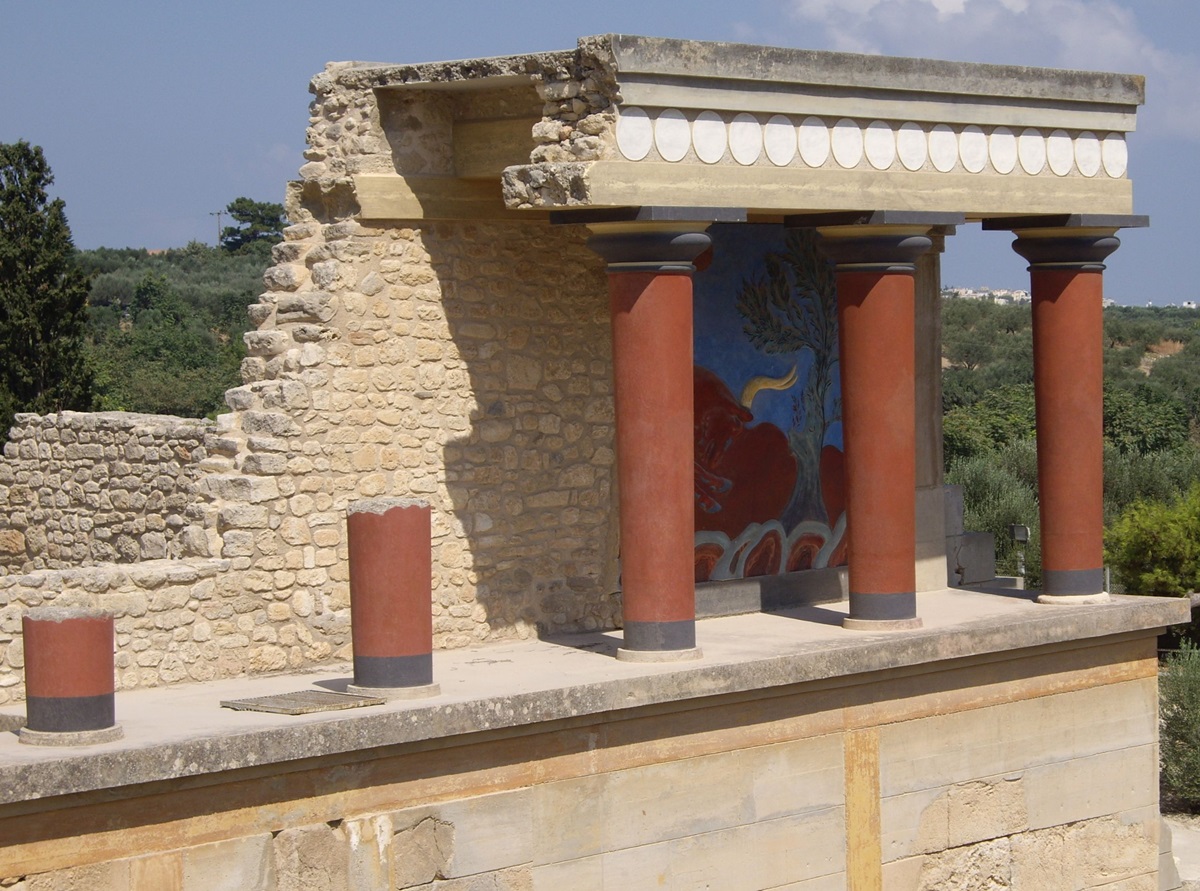 Knossos is the site of the most important and better known palace of Minoan civilization. According to tradition, it was the seat of the legendary king Minos. The Palace is also connected with thrilling legends, such as the myth of the Labyrinth with the Minotaur, and the story of Daidalos and Icaros.

The site was continuously inhabited from the Neolithic period (7000-3000 B.C.) until Roman times.

The Linear B tablets (Mycenaean script) of the 14th century B.C. mention the city as ko-no-so.

Intensive habitation occurred mostly in the Minoan period, when the so-called first (19th-17th centuries B.C.) and second palaces (16th-14th centuries B.C.) were built along with luxurious houses, a hospice and various other structures. After its partial destruction in 1450 B.C., Knossos was settled by Mycenaeans from the Greek Mainland.

The city flourished again during the Hellenistic period (sanctuaries of Glaukos, Demeter, other sanctuaries, chamber tombs, north cemetery, defensive towers) and in 67 B.C. it was captured by the Roman Quintus Caecilius Metelus Creticus. The "Villa of Dionysos", a private house with splendid mosaics was built in the same period.

Knossos was discovered in 1878 by Minos Kalokairinos. Arthur Evans conducted systematic excavations at the site between 1900 and 1931, bringing to light the palace, a large section of the Minoan city, and the cemeteries. Since then, the site and the surrounding area have been excavated by the British School of Archaeology at Athens and the 23rd E.P.C.A.

The restoration of the palace to its present form was carried out by Arthur Evans. The interventions were mostly imposed by the need to preserve the monuments uncovered. The Archaeological service of the Ministry of Culture carries out only consolidation work, whenever necessary. 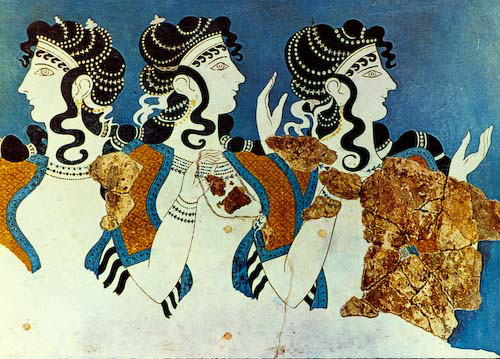 The most important monuments of the site are:

The Palace of Knossos. It is the largest of the preserved Minoan palatial centres. Four wings are arranged around a central courtyard, containing the royal quarters, workshops, shrines, storerooms, repositories and the throne room and banquet halls. Dated to 2000-1350 B.C.

The Little Palace. It lies to the west of the main palace and has all the features of palatial architecture: scraped wall masonry, reception rooms, a pristyle hall, a double megaron with polythyra (pi er-and-door partitions) and a lustral basin-shrine. Dated to the 17th-15th centuries B.C.

The Royal Villa. It lies to the NE of the palace and its architectural form is distinguished by the polythyra, the pillar crypt and the double staircase, with two flights of stairs. It is strongly religious in character and might have been the residence of an aristocrat or a high priest. Dated to the 14th century B.C.

House of the Frescoes. It is located to the NW of the palace and is a small urban mansion with rich decoration on the walls. Dated to the 15th, 14th-12th centuries B.C. 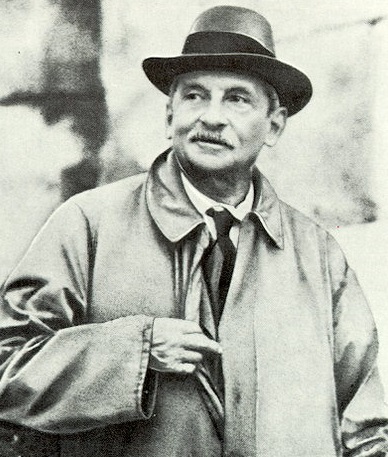 Caravanserai. It lies to the south of the palace and was interpreted as a reception hall and hospice. Some of the rooms are equipped with baths and decorated with wall paintings.

The "Unexplored Mansion". Private building, probably of private-industrial function, to the NW of the palace. It is rectangular, with a central, four-pillared hall, corridors, storerooms and remains of a staircase. Dated to the 14th-12th centuries B.C.

Temple Tomb. It is located almost 600 m. to the south of the palace and was connected with the "House of the High Priest" by means of a paved street. It seems that one of the last kings of Knossos (17th-14th centuries B.C.) was buried here. Typical features of its architecture are the hypostyle, two-pillar crypt, the entrance with the courtyard, the portico and a small anteroom.

House of the High Priest. It lies 300 m. to the south of Caravanserai and contains a stone altar with two columns, framed by the bases of double axes.

The South Mansion. Private civic house, located to the south of the palace. It is a three-storeyed building with a lustral basin and a hypostyle crypt, dating from the 17th-15th centuries B.C.

Villa of Dionysos. Private, peristyle house of the Roman period. It is decorated with splendid mosaics by Apollinarius, depicting Dionysos. The house contains special rooms employed for the Dionysiac cult. Dated to the 2nd century A.D. 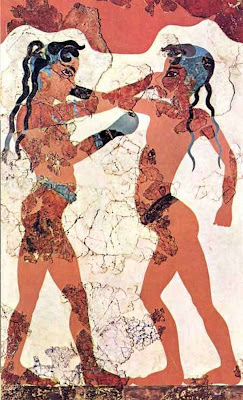 The Greeks were great sailors. As the Greeks were out and about, sailing the Mediterranean Sea in search of food, trade, and adventure, they were also on the lookout for new places to build Greek cities and outposts.

While sailing about, the Greeks stumbled across a tribe of people living on the island of Crete. These people, the Minoans, were a very advanced civilization for the times. They had a strong navy, which is probably why the Greeks never succeeded in colonizing the Minoan people.

The Minoan king lived in the capital city of Knossos, in a maze of a palace with 1500 rooms! It was a gorgeous palace. But during Minoan times, even poor people on the island of Crete had 4-room houses, with running water for drinking and bathing, and bathrooms that flushed! This was a very advanced civilization.

The ancient Minoans did have a written language. Far more than the records they left behind, the paintings on the walls of the palace at Knossos share the daily life of these ancient people. Some walls were painted with pictures of starfish and water scenes, much as you would expect from a civilization that lived on an island.

But some walls were painted with pictures of young people, both boys and girls, jumping over bulls. Scholars believed that bull jumping must have been a very popular sport in Minoan times. 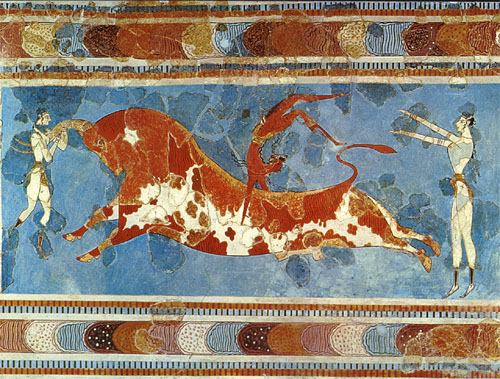 Around 1700 BCE, an earthquake hit Crete. Much of the Minoan civilization was destroyed. The Minoans rebuilt. Around 1500 BCE, a volcano erupted near the island of Crete. Tidal waves followed the eruption.

The Minoans might have been wiped out by natural disaster or by war. There were warrior tribes on the mainland of Greece. But scholars believe the tidal waves certainly weakened them.

Whatever the cause, around 1500 BCE, this civilization disappeared from the island of Crete.

The storytellers in ancient Greece loved to tell stories about the ancient Minoans. Some of the stories were about the mythical creature, the Minotaur - a mix of man and beast - who supposed lived on the island of Crete long, long ago.